I shot for Tell Me O Khuda with Vinod Sir in 2009-10 for about 25-30 days. Sadly, none of that footage was ever released. All I have of those wonderful days now, is a handful of pictures and my memories. I rarely talk about the making and unmaking of TMOK for obvious reasons, but today I must go down the memory path, just to remember Vinodji.

There are a thousand images that come to my mind when I think of Vinodji.

– The tall guy who ran along side a mighty horse on a beach for a commercial, almost dwarfing the horse with his elegance. (And this was 2 decades before Shahid Kapoor’s similar act in Kameeney.)

– The guy who could lift up the tallest figure of Indian cinema – Amitabh Bachchan – on his shoulders, throw him in a shed, beat him blue and black – AND YET be admired by the audience. (A scene from Amar Akbar Anthony – often aped later but never so convincingly again).

– The guy who sang almost an entire song on horseback – riding the horse so deftly like he was riding a bike (Song: Ye Khidki Jo Band Rehti Hai) much before you saw other heroes trying to replicate similar stunts with bikes and cars.

– The guy who ran for almost 20 minutes on screen in a thriller (Achanak). Again, much before Akshay Kumar’s parkour skills were put to test.

He was a big man. A majestic screen presence. A true heroic Indian onscreen personality. He was from a time when heroes’ faces could fill the 70mm screen in full picture format before this anamorphic framing ruined the close ups. He looked like a man you couldn’t mess with. When I was a kid, he was the man all boys wanted to become when they grew up.  He was the man among men.

When I was about to make a film in 2009-10, I wanted it to be tribute to the cinema of 70s. I wanted to make a larger-than-life film. The only 3 heroes that I wanted to work with were Vinod Khanna, Amitabh Bachchan and Rishi Kapoor.  I thought, I’ll bring the Amar, Akbar, and Anthony back on screen after 30 years.

Rishi Kapoor, more fondly known as Chintu Sir, was the first one I met and he assured me that Vinodji was absolutely approachable and a thorough gentleman. He told me I must get Vinod Sir’s approval before I meet Mr. Bachchan and also that this film would only work if all three of them were there. (Chintu Sir was absolutely right, but that’s another story.)

I first met Vinodji at his Malabar Hill apartment. He looked older than I had imagined, yet he carried the same aura of grace and awesomeness in the air around him. He had a big dog in his home. I’m a dog person, so that wasn’t a problem. When Vinod sir walked in, I was already playing with the dog. He looked at me and smiled. Probably, he approved of me as a director based on just that much. Rest of the meeting was a formality. I told him the story of my film and his role. I told him I wanted to present him very nicely on screen because he played an actual royalty. The shooting was in Rajasthan, Mumbai and Goa… so and so dates… so and so cast… etc etc.

Now, before this meeting with Vinod sir, I had already discussed with Chintu sir that there was a full-on action climax in the film. And Chintu sir had warned me that it might look stupid if I made ‘senior citizens’ fight like young heroes. He wasn’t too keen on the action bit. ‘Hum teenon baap hain. Dhishoom Dhishoom karengey to ch***** lagengey!’ He said.

But my argument was that they were the famous trio – Amar, Akbar and Tony (yeah) – so they must fight like heroes in the end and save their daughter. Anyway, the point is, when I met Vinod sir, I had decided not to dwell on the action in my narration as I didn’t want to hear another lecture about age appropriate character behaviour. Being the smart ass, confident, young director that I was, I had decided to cheat all the big action stuff with duplicates and call the lead actors only for close ups etc. So there was no need to tell them the details. But once I started narrating, I got carried away (as it happens with me every time I narrate) and narrated the details of how his character Rana Amar Pratap Singh, would ride a horse and how he would run and jump and beat the goons!

‘Satyanash!’ I told myself after the narration. ‘He’s gonna throw me out of his house, now’.

But he didn’t. And the proof are the pictures here. 🙂

Despite the fact that we never could get Mr.Bachchan on board, Vinod ji shot every day with grace, dignity and full involvement. He climbed a hundred steps up and down, despite his ageing knees.

I had a scene in set around a royal golf course in which he drives around in an open jeep and then plays golf. He was so excited during the shoot that he worked out a few juggling moves with a golf ball and timed it with his dialogue, to perfection. How cool!

Despite me begging him to not do it, he rode a horse, refusing to use a double. Trivia hunters can save this photo under ‘probably the last time Vinod Khanna rode a horse on screen’. 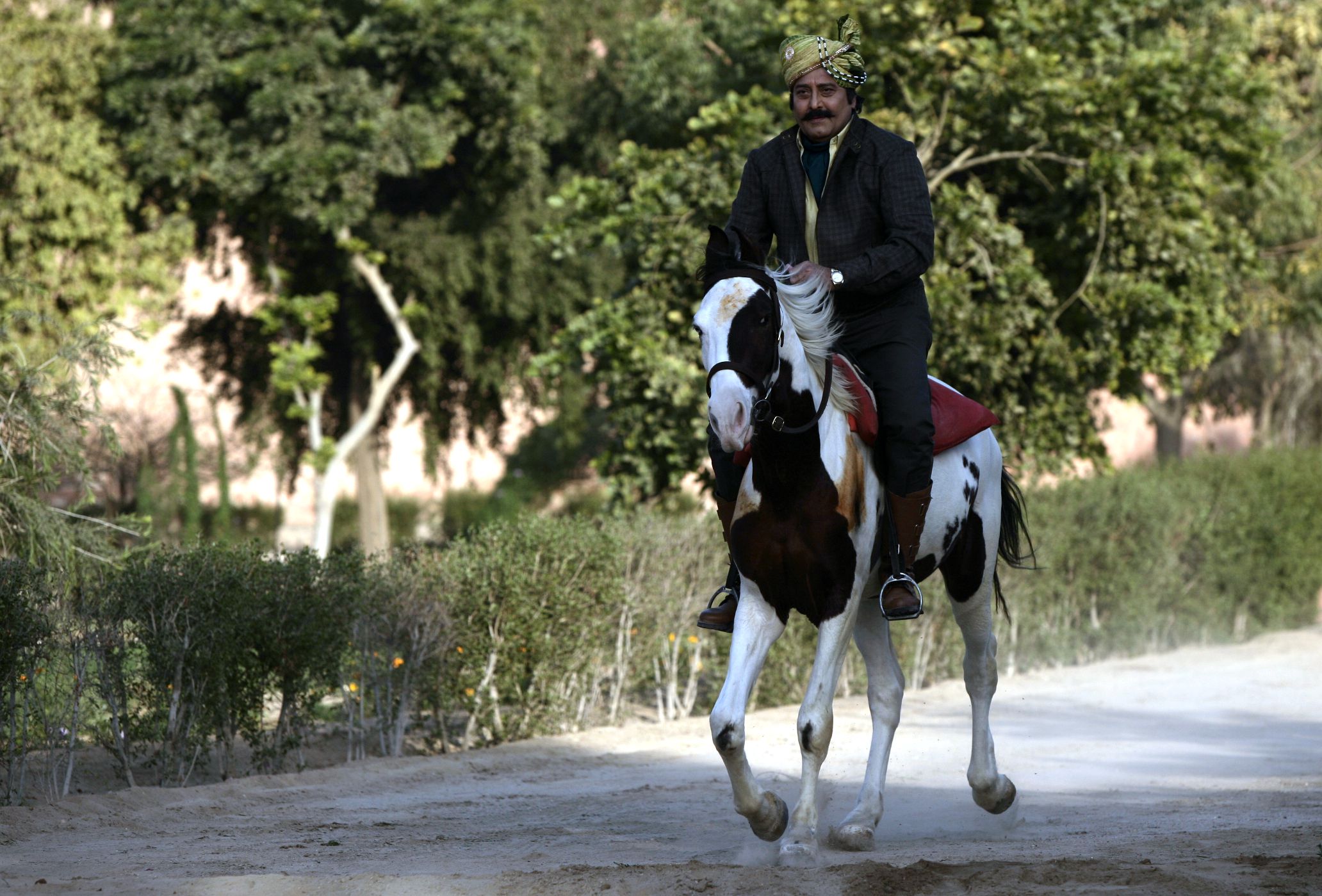 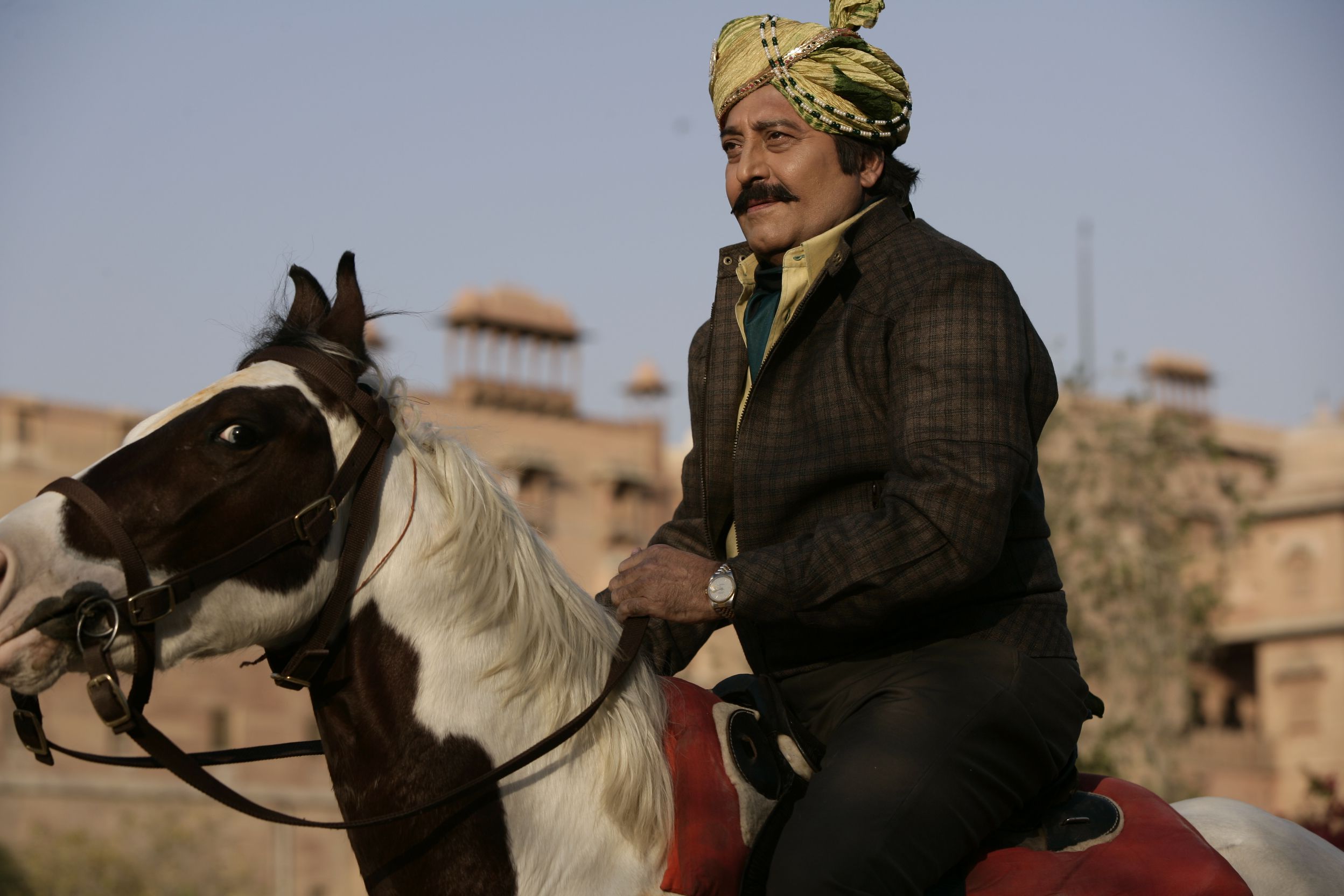 And very generously, very lovingly, during the shoot, he told me stories after stories of working with various great directors in 70s & 80s.

Out of the thousand memories I have, the most unforgettable is of my first day of shoot with him. We were shooting in a palace in Rajasthan. My producer, Hema Maliniji, wouldn’t come on shoot very often. But that day, she came and sat by the monitor, early on. The shot was ready and I called for Vinodji. Moments later, I heard Hemaji gasp! (I swear I’m not making this up). I looked at her and caught her looking in the direction of Vinodji as he was walking to the set in his full royal regalia. Now, I had worked hard on Vinodji’s look with my stylist Subarna Ray Chaudhary, so I knew what clothes he was going to wear, but the full impact of an actor wearing his costume happens only when you see the actor on the set, in those clothes. Seeing Vinod Sir walking that day, it actually felt like seeimhg a Maharaja walking into his Darbar. 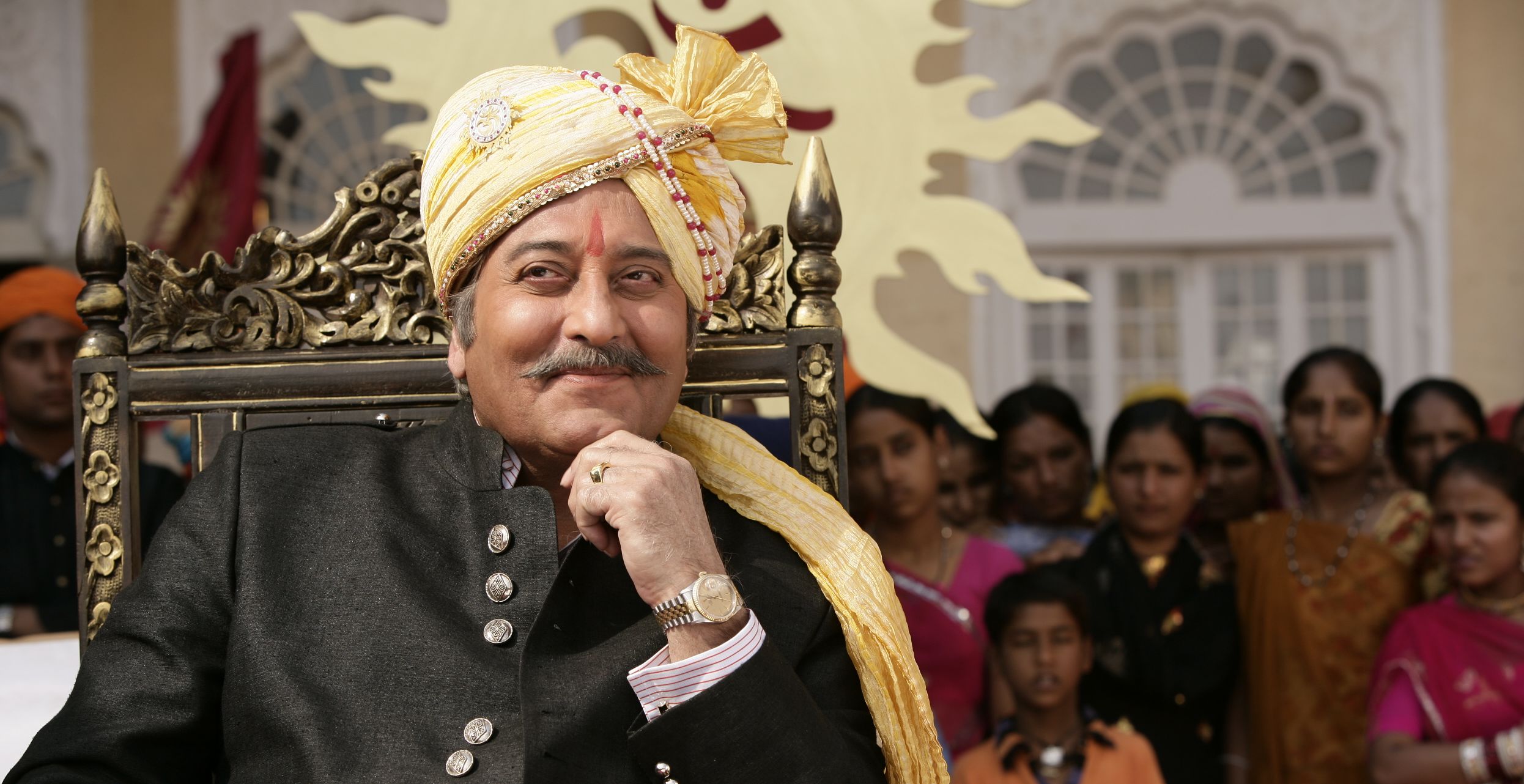 ‘My God! So handsome, no?!’ Hemaji, the Dreamgirl of yesteryears, was gushing, looking at this ‘senior citizen’. That was Vinod Khanna’s charisma. If he could make people feel like that in person, sure he could beat up 10 goons on screen.

Heroes don’t get old. They just get bigger. 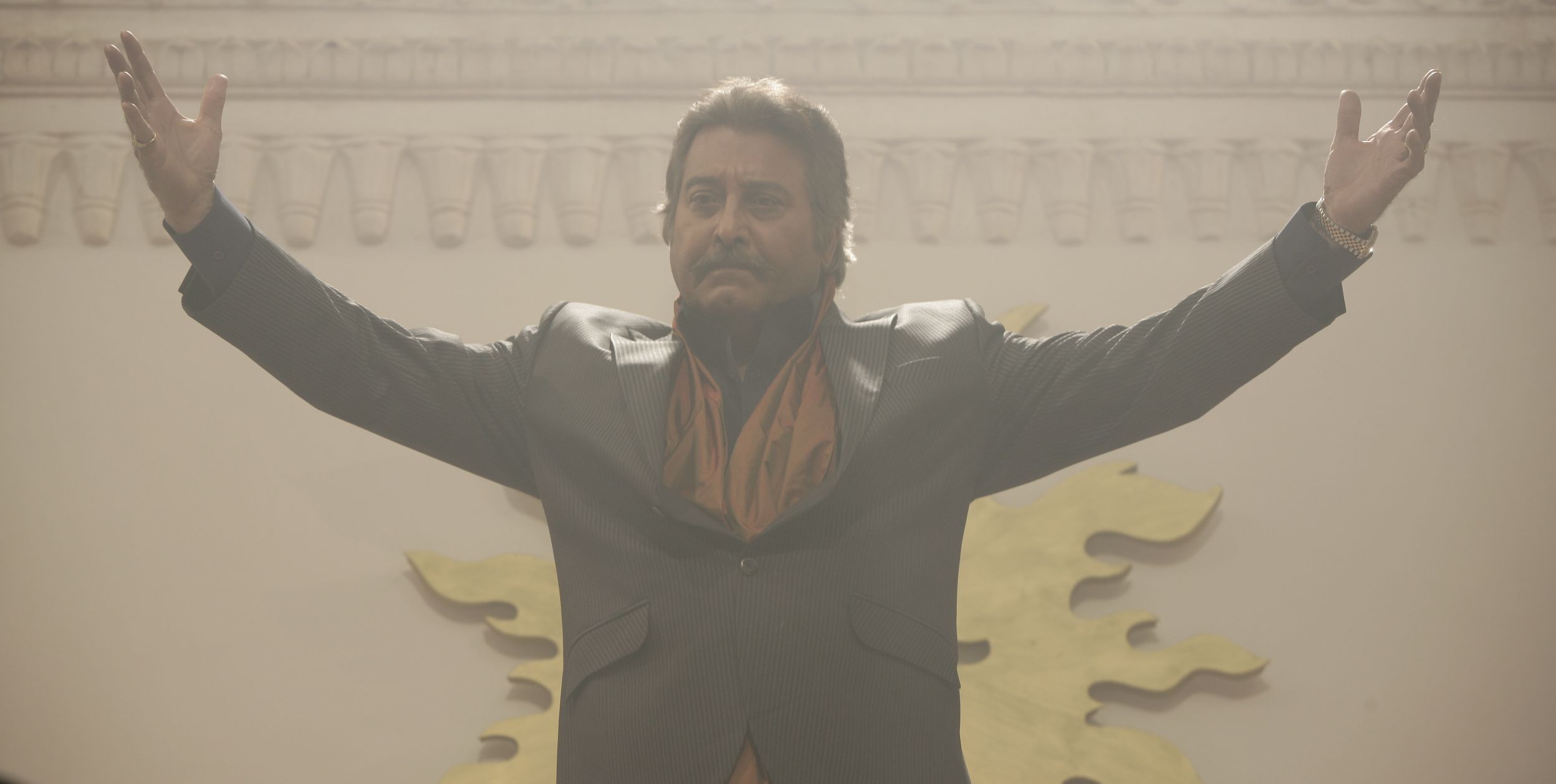